Thanks to your attendance and support in 2019, we all enjoyed a great summer at Midway!

Midway Park did have a Ferris Wheel in the early 1970s and this model obtained from Lakemont Park dates from 1948 but appears to be the same model that once revolved at Midway. Although Midway never had a Twister, the park does have an excellent collection of Allan Herschell rides from the 1950s, and this 1959 Twister adds to that collection.

The Friends of Midway have been pleased with the enthusiasm surrounding the new Putt-A-Round Chautauqua mini-golf course. This first-class design was inspired by Friend of Midway Peter Sullivan and implemented by Adventure Golf Services, a leader in the industry and local heroes who went above and beyond the call during the construction period. Since opening on July 1, 2016 the course has hosted over 25,000 players and has generated thousands of dollars toward the purchase of rides and attractions for Midway through the proceeds from evening mini-golf play.

Here are images of the Ferris Wheel and Twister in action at other parks. 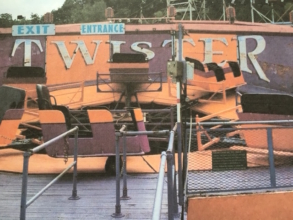 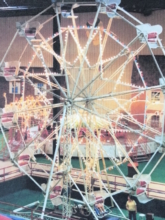 During the past four winter seasons the Friends of Midway conducted successful campaigns for the restoration of the Chautauqua Choo-Choo cars and locomotive, a product of the Miniature Train Company, that has been circling the park for the past 60 years. Thanks to everyone who donated to make this restoration possible.

Here is a picture of the restored Chautauqua Choo Choo waiting for you at the station. 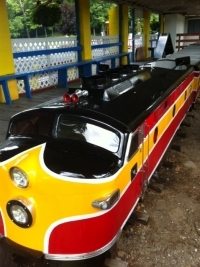 In May, 2015 a newly constructed train station became the boarding point for the Chautauqua Choo-Choo. A new design makes it both period-friendly and suitable for parking and storing the train in an enclosed space.

And, of course, over each winter, the Midway State Park crew has been hard at work repainting and refurbishing rides. Here are a couple of shiny new kiddie copters ready to whirl in May!

In 2012-2013 the state budget supported capital renovations to the Herschell Carousel roundhouse by replacing the piers, roof, glass, and making drainage improvements. With these stronger supports in place, the carousel has been returned to its home, and thanks to the generosity of families and friends whose connections to the carousel are strong, all of the 30 carousel horses were sponsored and funds have been paid to support the decorative painting of all the horses for the 2014 park opening. Thank you to all for your love of the carousel and your outstanding commitment to the restoration of this treasured ride.

Here are pictures of the carousel horses being repainted February through April, 2014: 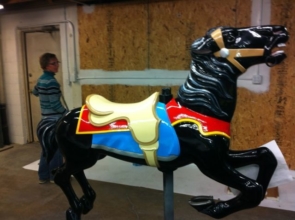 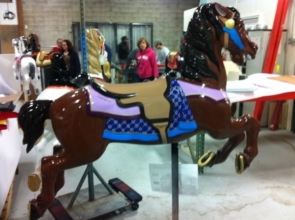 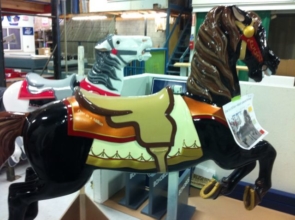 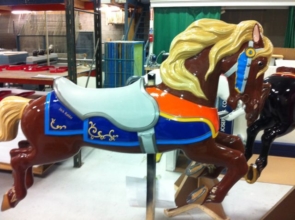 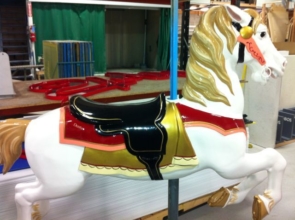 And here are a couple of pictures of Maple Springs neighbors who bundled up for the frigid first ride on May 23.

By pursuing the renovation and restoration of the Midway Park carousel, we join a large group of carousel enthusiasts regionally and across the country who have successfully pursued restoration projects in recent years. The Olcott Beach Carousel Park is located here in Western New York and has done some impressive renovation recently, including work on many Herschell rides such as we have at Midway. To learn more about the experiences of park renewal enthusiasts and see their successes, please visit the resources and links below:

Keep up with the latest through the Friends' e-news, 'Dispatches from Doraldina':

To download copies of organizational minutes, documents, and other resources please click on the document links below.